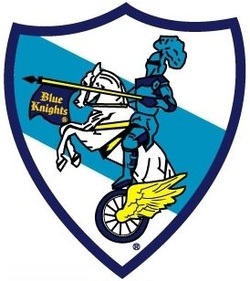 
is a non-profit fraternal organization consisting of active and retired law enforcement men and women who enjoy riding motorcycles. In the 1974, several law enforcement officers from the Bangor, Maine (USA) area met and formed a small, local motorcycle club. The rest, as they say, is history.

The Blue Knights International was founded in 1974 in the USA, and history in Australia dates back to 1978. We are the oldest Law Enforcement Motorcycle Club in Australia. Adding to that, the Blue Knights is the largest law enforcement motorcycle club in the world with over 20,000 members. In Australia we are referred to as Blue Knights Australia. Members must have or have had arrest powers by statute under national or state legislation, and as such we are pretty exclusive. There are now five Chapters in Australia: Australia I has its chapter office in Perth; Australia II caters for southern NSW, ACT, VIC, SA and TAS; Australia III administers QLD and the NT, Australia IV has its chapter office in the outer metro area south of Perth in the Peel Region, WA, and our newest Chapter Australia V caters for Sydney and Northern NSW.

The rewards of being a member of the Blue Knights are:

•          enjoying good company, sharing the common bond of law enforcement and the love of motorcycles;

•          family members are welcomed as part of the Blue Knights family;

•          being able to visit, ride and stay with fellow members in countries all over the world; and

The main benefit of being in the Blue Knights family truly involves the friendship and camaraderie you get from like minded persons. Members from all states and countries are greeted with warm welcomes and offers of food and accommodation when they travel. These non-material benefits are what set apart the Blue Knights from other clubs.

We support charity and community service events, and every year we have a few major rides we organise or participate in such as the National Police Memorial Wall to Wall Ride for Remembrance in September and the annual Toy Run in various cities in December each year. We also do social day-rides and weekend rides that are family oriented where non-members, partners and kids can join in (by bike or car). We participate with other clubs' events but we ride as Blue Knights as part of their event.

In the membership pack is a Blue Knights International lapel pin, 2 stickers, a membership certificate an International membership card plus chapter specific items. You get access to the national and international forums, and are eligible for a range of discounts at various locations online and around the world, plus a US$3,000 death and dismemberment benefit.

More importantly though, the non-material benefits are meeting lots of like minded people who share a common bond of law enforcement and who ride bikes. Not just one brand or type of bike, but all kinds: BMWs, Ducatis, Harley-Davidsons, Hondas, Indians, Kawasakis, Suzukis, Triumphs, Victorys, Yamahas, cruisers, touring, 3 wheelers and sport bikes. You name it, we ride it! Law enforcement camaraderie is far more important than what you choose to ride.  There is a wealth of information sharing such as mechanical, electrical, accessories, manufacturer recalls, parts, modifications and clothing. We are also a very fraternal organisation and support each other as a family through financial, material and friendship support, and that carries over into our international organisation. Some of the Australian Blue Knights who have travelled overseas visited fellow members all across the world and never put their hand in their pocket for accommodation, and there was often a bike available to ride.

We look forward to welcoming you and your family to our family!


THE STORY BEHIND BLUE KNIGHTS IN AUSTRALIA

As such, we are the oldest law enforcement motorcycle club in Australia. In 1982 our founding President Bob Depeau started the Blue Knights in Australia. By 1983 AUSTRALIA I was chartered in Sydney and by the end of the 1980’s had over 90 regular members. This was the first Law Enforcement motorcycling club in Australia and set the bar for all others to follow. Towards the end of 1993 AUSTRALIA I disbanded with members again at large maintaining links with Washington I.

In 2005 AUSTRALIA I was re-chartered in NSW and in 2008 moved to Perth WA where it sits today.

Since then, the club has chartered a further four chapters, serving the East, North, and South of the country.
On 14 July 2010, the second chapter of the Australian Blue Knights was formed. This second chapter, “AUSTRALIA II” catered for the other states and territories outside of Western Australia.

In July of 2011 the club chartered a third chapter “AUSTRALIA III”, to serve the Knights of Queensland and the Northern Territory.
By the end of 2012 “AUSTRALIA IV” was chartered in the Peel district of WA.

Our common bonds are Law Enforcement as a profession and the love of motorcycling as a social activity.

Was established and chartered in April 2014. It was established after the decision to divide the Australia II chapter who at that time encompassed the states of NSW, ACT, VIC, TAS and SA.

The Board of Australia II had put the idea up to the membership of Australia II at their biannual AGM at Mallacoota (Vic) March 2013 in which they discussed the idea of splitting the chapter so that the vigorous growth in membership could be easily administered as well as following the ideals of maintaining a more locally focused club for the members. At this point the membership of Aus II was well over 100 and growing rapidly, so it was decided to divide the chapter from Goulburn NSW to the top of the state would become a new chapter with is focus on the Sydney area.

This fell into the overall vision of the founding President of Aus II (Boat) who felt that we should be looking at more chapters not based on geographical boundaries but on membership density and the ability to get more activity happening (rides, charity events and social gatherings) and to lessen the administrative burden on the elected officials of the chapters.

And so with that we submitted the paperwork to the International Board and was approved and chartered in April 2014. The Australia V Board was established with Boat as President, Casper as VP, Staff as Secretary, The Rock as Treasurer and some 5 directors. About 60 members transferred with the establishing of the chapter with the majority of them residing within the Sydney region. These establishing members have all be given 'Australia V Charter Member' patches to signify their special place in the history of the chapter and the Blue Knights.

So the Blue Knights in Australia just go from strength to strength with over 300 members Australia wide as of this chapters establishment and growing rapidly.